May 1st – I potted on 25 lady’s bedstraw and 46 teasel, though there are many more left to do! I have moved some of the plants into the ‘potted plant display area’ and potted on the budleja; they are still quite small but are developing well. 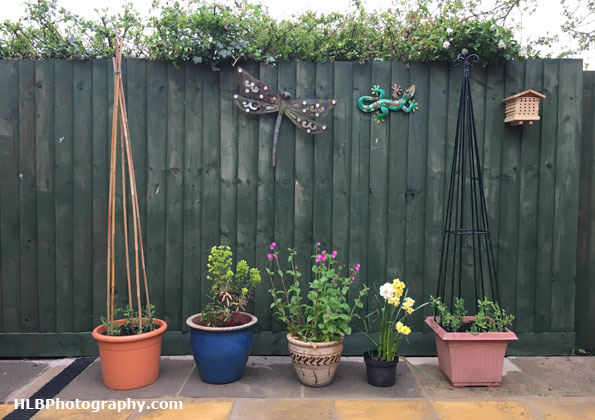 May 2nd – tonight I potted on another 32 teasel and tried to make more room in the glasshouse; I am rapidly running out of space!

May 3rd – I finally finished potting on the teasel; another 68! which gives me a total of 215! I wasn’t expecting that many to germinate; good job I have a large field I can plant them in! I saw some down by the river last year, so when they are big enough I think I will start by planting them out there. I’m sure the birds that live there will appreciate them when they go to seed.

May 4th – I spent the whole day in the garden; I ‘weeded’ all pots and gravel on the right hand side of the garden; I was primarily pulling up herb robert, I did feel bad as it was in flower, although it was starting to take over much of the garden space 🙁  I moved a large thistle from the raised bed and put it out in the field hoping it will survive; in its place in the garden I have put the peony. I knew there were some old pots chucked in the field underneath the hedge so I took the opportunity to drag them out; I was expecting them to be broken but they are perfectly fine and full of compost!  I actually think they have been there that long the compost is actually leaves that have broken down.  They are now in the garden for me to use 🙂 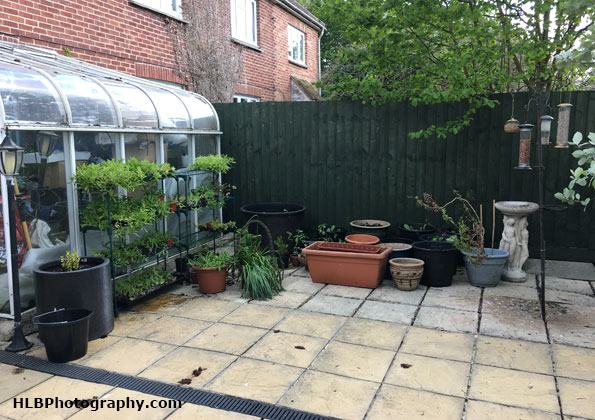 I have moved some of the pots around and now have a ‘development’ area, this has all my plants which have been recently potted out and pots that are yet to be filled.  I have deadheaded all the daffodils and potted on 32 ox-eye daisy’s – I have run out space to pot on anymore at the moment!  Some of the sweet williams have been planted in the pot with a rose.  I did want to get them all planted out but I have decided that the pots at the front of the house which do not have holes in need to have internal pots to have some drainage so I have to wait until I can buy some.

The aquilegia has started to flower, I wasn’t expecting them to be white – I didn’t plant them so had no idea what colour they would be, I have never seen white ones before.  I am glad there are now some flowers starting to bloom for the insects. 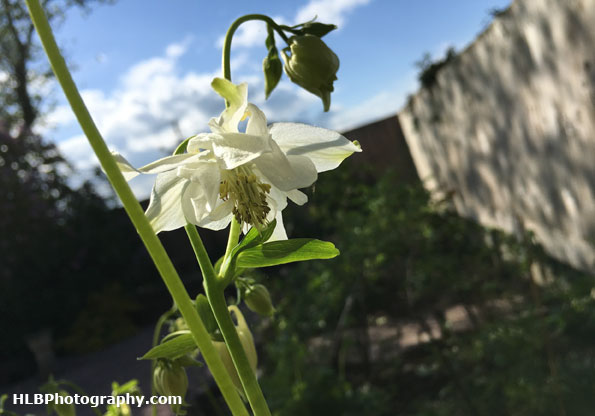 May 5th – I went to buy more peat free compost today; there was one bag left and I was told they wouldn’t be getting anymore for another 3 weeks as its difficult to get hold of!  They said there might be more outside as they had compost in a few different areas; thankfully I found some.  I guess it is good that they had run out and that it is difficult to source as it indicates more people are using it.  However, its not great if being out of stock means it forces people to use peat instead – I would have had to have gone without!

May 7th – I was going to pot on more of the ox-eye daisy’s today but I noticed the field marigolds had grown rapidly, I potted on all of them, which turned out to be 41 and then I decided to sow some more!  The intention was to have some as cut flowers (my friend often visits his mothers grave and I think she would like to know they have been grown in her garden).  Also I have not had a lot of luck with the rudbeckia, not many have germinated; last year I had quite a few in the garden and the bees loved them.  This year I do have more plants growing but I feel bad I have failed them with the rudbeckia, hopefully the borage will make up for it!  There are a few pots that go back and forth to the grave site and I had noticed that the skimmia japonica rubella hasn’t been looking too well.  I bought some larger plastic pots to pot them on (I don’t like buying plastic but to be put on a grave I thought they would be more appropriate).  The poor things were completely root bound!  I believe there are actually three plants in each pot and one of the pots is looking half dead!  I will watch it for a few weeks and may have to try and divide it up to remove the dying ones.  They do look much happier in their new pots though.

May 8th – This evening I popped to The Range to buy pots, (again plastic ones :() to put in the pots with no holes for the sweet williams, I need to be able to lift it out if the weather is really wet so I can allow them to drain, unfortunately this means plastic.  I do plan on looking after all my pots and hope they last for many years to come, at least they weren’t black so hopefully at the end of their life they can be recycled.  I also bought two more terricotta pots as I remembered that I needed to pot on the hellebores!

May 9th – Today was planned in advance, I hate going to the dentist so I took the whole day off of work so I could turn a horrible day into a productive day.  The plan was to clear out more of the glasshouse to create more space for the plants.  I have to say it was a mess! 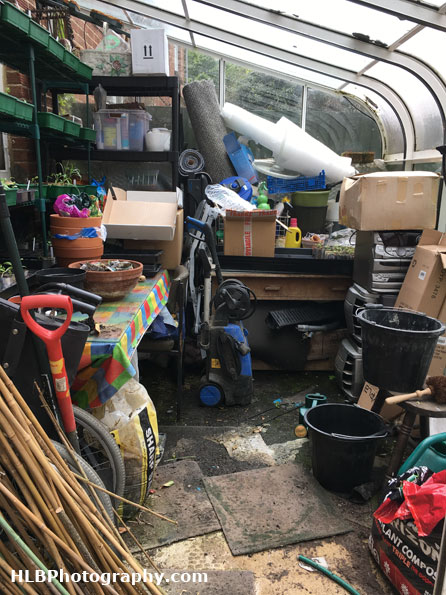 After about an hours worth of sorting and tidying there was a trailer full of broken items to go to the recycling centre and a lot more space in the glasshouse.  There is still more tidying to be done but it makes it workable for the rest of the summer and it can be thoroughly cleaned and sorted in the winter. 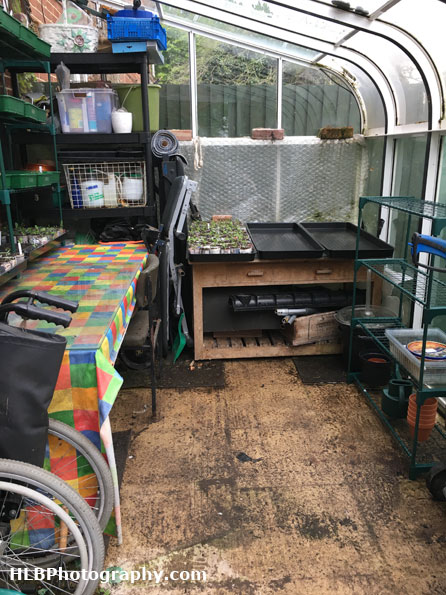 I also potted out 4 more borage, potted on 111 ox-eye daisies (until I ran out of paper pots!) and made 80 more newspaper pots ready for next week.  I need to make some more though as I have more than 80 seedlings in the glasshouse!

May 13th – Potted out another 2 pots of sweet williams, I don’t think I will ever need to sow anymore seeds for them, I still have loads left!  I have been giving them away at work; hopefully I can give away a few more!  I was going to pot on the ox-eye daisies tonight but I noticed the perennial flax were growing rather fast so potted them on instead, I only have 9, as I didn’t collect many seeds; I only had one growing in the garden last year, it must have sprung up from a pack of wildflower seeds.

May 14th – some of the plants need to be put into the raised bed so tonight I spent some time ‘weeding’ out all of the plants I know are going to take over, I didn’t get very far as there were so many of them 🙁

May 16th – I finished ‘weeding’ the rest of the raised bed and planted out 33 cornflowers 🙂 I didn’t put them all out at once as I wanted to see if the slugs were going to eat them or not first!

May 17th – I’m pleased to report that the slugs left the cornflowers alone so hopefully next week I will be able to get the rest in.  The chive has started to flower 🙂 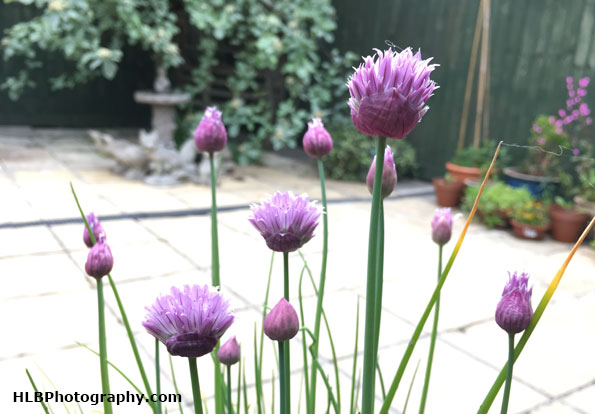 May 20th – I didn’t have a lot of time in the garden tonight as I had to work late but I managed to tie in some of the jasmine that has started to sprout after it was cut back last year, and I started to sort out some pots to put some more of the borage in.  I feel really bad as they are still in tiny pots and not looking too well 🙁 I hope they will perk up once they have been transplanted.  I finally remember to take a photo of the Rhododendron which has started to flower 🙂 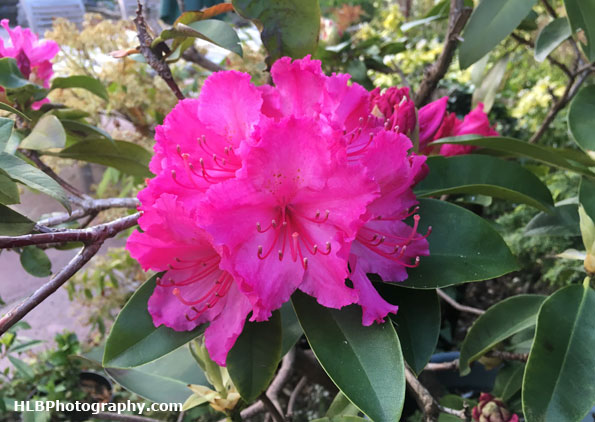 May 21st – I potted on 9 of the borage tonight; I still have a lot to go but 9 is a start.  I planted out 14 of the sunflowers, I am hoping the slugs and snails stay away from them this year; I have left the rest in reserve just in case the ones now in the garden get eaten!

May 22nd – I don’t normally do very much to the front garden as it is generally left for the owners Dad to potter with; as he’s not been too well, tonight I have removed the herb robert from the window box, rescued the daffodil bulbs, refreshed the compost and then re-potted the bulbs and added some pansies that were being root bound in a pot as some ‘weeds’ had taken over.  It looks much better, but now I feel I need to ‘tidy up’ the rest of the space too 🙁 I just have too much to do in the back garden to worry about the front at the moment!  I finished potting on the last of the bird’s-foot trefoil – another 32; gardening by head torch isn’t as difficult as I thought it would be, at least it meant another task was ticked off the list!

Tiny strawberries have started to develop in the hanging basket 🙂 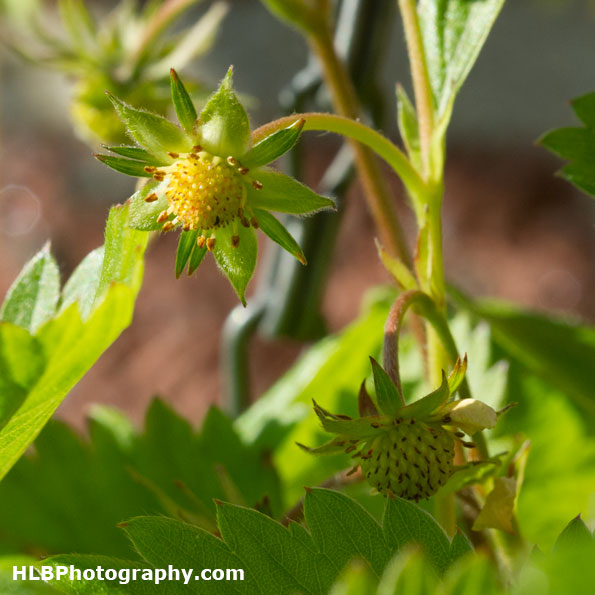 May 23rd – Tonight I managed to tie in some more of the Jasmine.  It has started to sprout more and is waving stems around in the wind, if I don’t keep it in check then it will probably get broken off so I have been doing my best to weave it back into the lattice or tie it to itself! I managed to plant out 20 cornflower and 15 teasels into the raised bed and potted on another 56 ox-eye daisy – I have way too many!

May 24th – Today I was busy potting on 131 red campion!  I also managed to ‘weed’ all of the pots and the raised bed.  Although I hate to say it, it looks a lot ‘tidier’ now, much more cared for.  I feel I can tidy every now and again as I will leave as much as I can for the wildlife.

May 26th – Potted on 33 common feabane & 68 ox-eye daisy (I have more ox-eye daisy that needs to be potted on but I think I will now plant them straight out!)

May 27th – Planted out 15 cornflowers into the raised bed. And re-arranged the pots. Daisies, buttercups and wood avens are now all starting to flower. 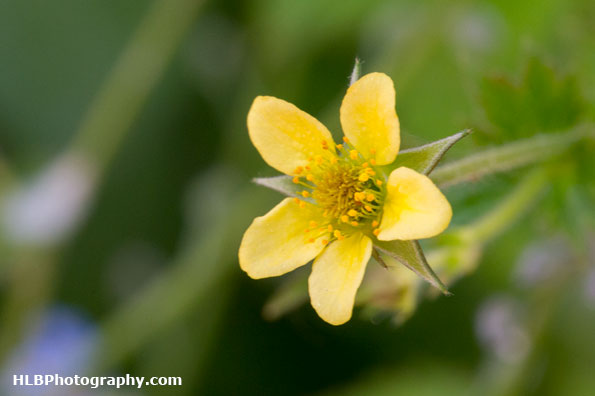 May 30th: There are some potted plants that haven’t received much care over the years; I have now re-potted them 🙂 I also potted on some of the tomatoes. 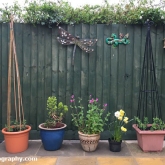 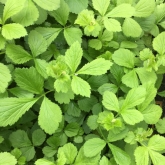 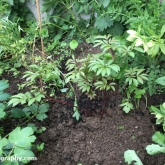 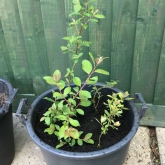 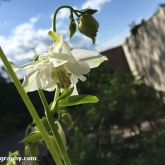 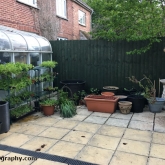 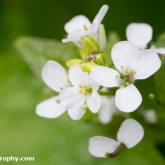 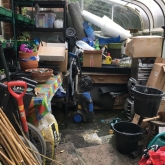 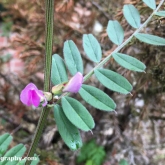 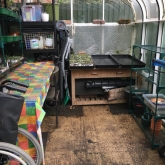 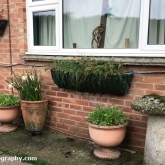 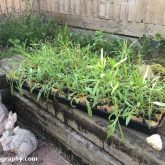 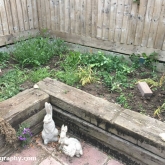 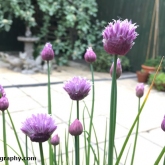 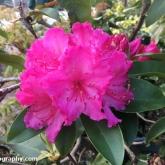 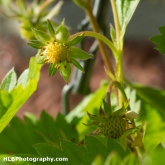 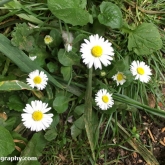 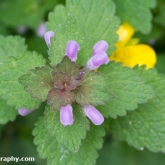 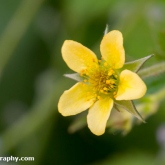