Those of you who follow me on Twitter will know about the Woodpigeon’s that set up a nest in our neighbours tree.  I noticed the nest on April 3rd but I had not seen any birds on or around it.

On April 16th a Woodpigeon was sat on the nest.  Obviously I had to try and find the best view, which was from the back bedroom window.  Unfortunately the bottom half of the window is frosted so a ladder was required and a steady hand to hold the camera!  I left the ladder set up so I could pop in every now and then to check up on them…

April 17th – there was movement… a squab (a young unfledged Woodpigeon), which must have been hidden underneath its parent or on the other side of the nest as it wasn’t visible before.  There seemed to be only one. 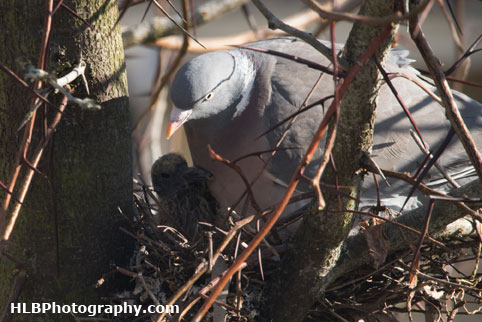 April 19th – Adult bird has started to leave the squab on its own.  Definitely only one in the nest.

April 20th – A cat climbed most of the tree trying to get to the nest at about 06:00, luckily I heard it and scared the cat off!  A parent stayed with the squab all day.

April 23rd – A parent was on and off of the nest all day.  The squab was stretching its wings and preening.

April 24th – A parent was on and off of the nest all day.

April 25th – A parent was on and off of the nest all day.  The squab was stretching its wings and preening.

I have seen him/her in the garden since fledging, eating with the other Woodpigeon so is doing well. 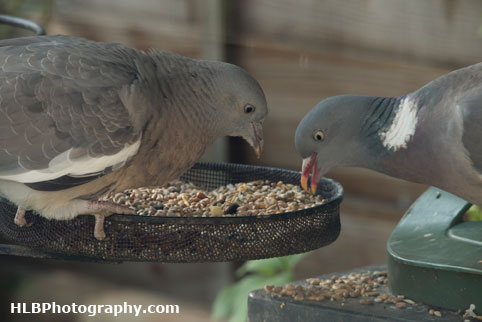 The parents are now back on the nest incubating again 🙂 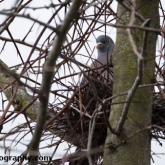 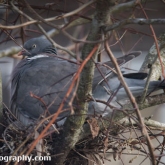 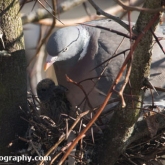 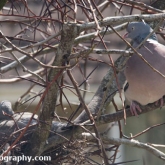 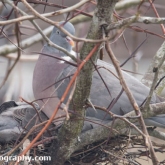 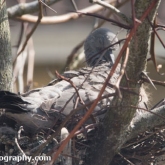 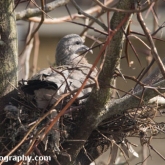 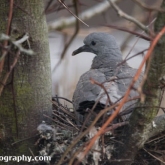 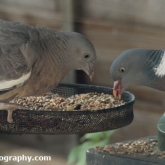