This afternoon I had a few hours spare so decided to visit Blakehill Farm Nature Reserve.  I have been meaning to visit since last summer but I just haven’t got there! The idea of seeing a short eared owl tempted me.  As soon as I had set foot in the reserve I saw a redwing, my first for this year 🙂  I wandered along the path keeping an eye out for anything that moved.  There was a collection of carrion crows and rooks feeding on the grass but little other activity.  I carried on walking as it was bitterly cold – I had dressed in all my warmest clothes but my fingers were suffering even with gloves on.  A kestrel flew over in the distance.  The sun was starting to set and the temperature was dropping further, I started to head back to the car.  I noticed a stonechat and then a robin in a nearby tree.  The stonechat’s accompanied me on part of my walk back, keeping a few fence posts in front of me.  I stopped to take a few images, on another post behind the stonechat’s a kestrel had perched.  I didn’t see a short eared owl on this occasion but there’s always another day, hopefully a warmer one! 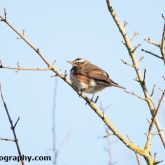 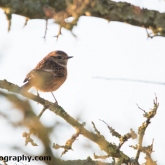 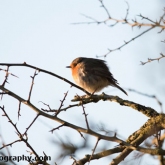 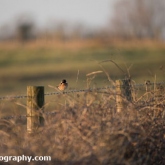 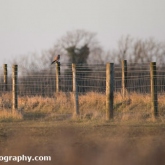 January at the field has not been overly successful.  I have only spent one day in the field and not had many encounters in the evenings and mornings because of the lack of light at the moment – though it is improving 🙂

January 26th – I took the day off of work to spend some time at the field. I was lucky it was a sunny as the days either side were wet and gloomy.  I don’t ever see a lot walking along the top edge of the field, I think part of that fact is I have to look down a lot!   There are lots of holes/burrows in the ground, though the ones I have mentioned before seem to have collapsed as the ground has sunk though new holes have appeared! I’m sure they belong to rabbits, but I am yet to see a rabbit in the field!  I did have a quick glimpse of a robin and a blue tit that were in the hedgerow.  There are a lot of paw prints along the track I was walking, though I am 100% sure they belong to the cat! 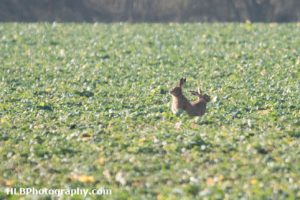 Walking down the side of the copse was again the most productive part of my walk. The squirrel drey is still securely in the tree and as I was looking up a heard a nose and looking at the base of the tree a saw the whites of two large back paws bounding away, I had disturbed a hare that I think was sunbathing in the cover of the part of the hedgerow.  I hadn’t seen it, if I had it would have made a lovely photograph.  I was looking out across the field and saw a couple of lumps, I had a look through the binoculars thinking they would be clumps of mud, nope TWO HARES!!!! They were a fair way off in the field and didn’t seem at all bothered by me watching, they were grazing, cleaning etc  I was having problems 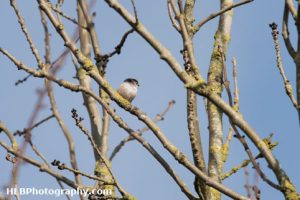 photographing them, I was looking into the sun and there was a heat haze across the field – typical! I have never seen two hares together before and I was so surprised to see them. My attention was drawn away to the birds in the hedgerow, two robins that were hoping about having a slight territorial dispute and then to long-tailed tits in the top of the trees.  Walking down the lower part of the copse towards the river I again spooked the roe deer.  I hear them moving then normally see white bottoms bouncing off through the trees.  I need to locate myself in the copse at some point to photograph them.  My guess is there is normally two or three that run off. 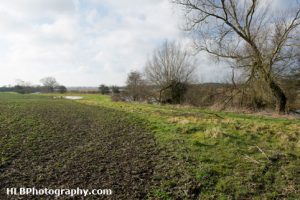 The river was full.  It had obviously burst its banks recently as a patch of the field was a large puddle.  I have never seen it that full before.  It did look pretty with the sun shining and the neutral tones of the fields behind. Two swans flew over and later a cormorant.  I heard a wren and a moorhen but didn’t see them.  The holes that I have seen in the bank previously were fully submerged so if they were homes to any creature they were 100% flooded out.  I was stood watching three goldfinch flitting between the trees, I turned round to find a hare metres from me.  I slowly lifted the camera to take a photo but it was gone as soon as I moved a muscle, I hadn’t expected to see one right behind me!  I estimate there were 3 to 4 hares in the field! As the river receded from its original flooded level it has dropped lots of plastic bottles along the rivers edge, I did think about trying to get them out, however, I was on my own and didn’t know how sturdy the bank was! I will take backup and fish them out next time I go.  If the water level doesn’t rise again they look like they will remain wedged in the tree line. 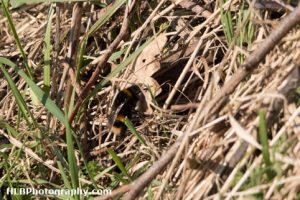 Rather than walking round the field I walked back up the copse. Two wren were in the hedgerow and a blackbird was keeping a few meters ahead of me all the way along, I’d get close it would fly a little further along and the continued.  I heard a bee, a queen buff-tailed bumble bee, it was buzzing along the side of the hedgerow.

As I reached the top of the field I heard a buzzard calling, when I turned I realised there were three circling over the copse riding the thermals.  Looking over the slight ridge to the left I could see the mute swans, 24 of them 🙂

As I wouldn’t be able to visit the patch over the Big Garden Birdwatch weekend I decided to do a count in the garden for my own records.

January 29th – It is now noticeable that the evening are very slowly getting lighter.  I am looking forward to February as I’ve scanned the sunset calendar and by the time February 20th rolls round the sun will be setting at 5:31pm which means I will be able to get about half an hour of light to have a quick look around or start work on the garden at my patch – the land owner hasn’t done anything with the garden for a while due to personal reasons and I have been granted permission to ‘improve its wildlife friendliness! 🙂 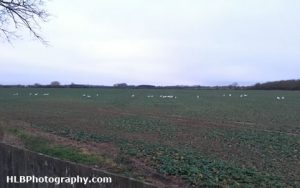 January 30th – 31 mute swans were just on the other side of the fence, I didn’t have my camera so I took a quick photograph on my phone.  I haven’t seen them that far up the field before.  Hopefully they will be staying around for a little longer, I think they will still be there for as long as the crop is still sprouting. 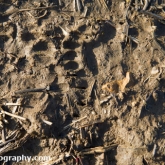 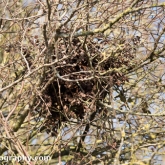 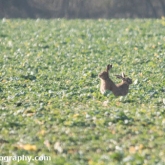 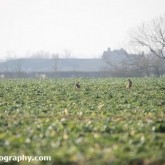 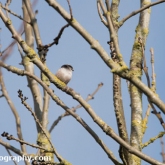 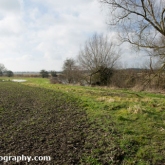 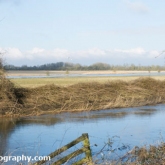 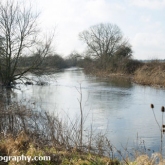 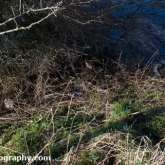 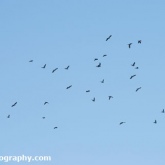 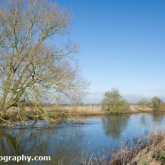 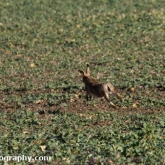 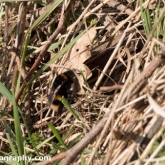 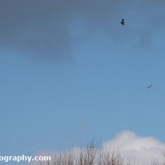 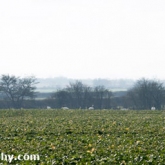 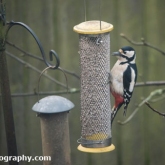 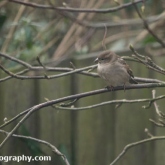 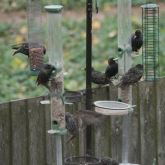 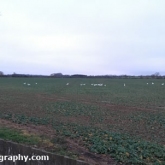